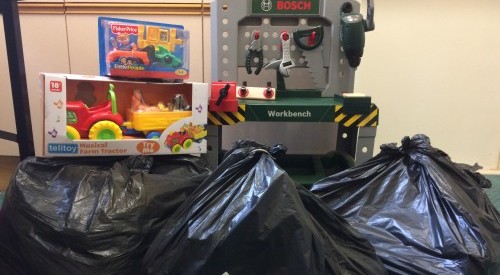 As anyone who attended the information evening for the refugee crisis on 30 November will tell you there was such a buzz in the room, such a feeling of love and of wanting to help our vulnerable brothers and sisters; the room was energised. It was enlightening that so many are doing so much already. The Parishioners who attended on the night from Blessed John Henry Newman Parish commented “we have never attended a meeting a meeting like this before, it was heaving”

Within 24 hours these Parishioners had mobilised and delivered to Catholic Care donations of toys bedding and clothes. These will be immediately distributed to those in need. On Wednesday evening we all talked about not working on our own and to join forces with others to be really effective.

At Catholic Care we help to support an organisation called Palm Cove Society who provide a range of accommodation services for those most vulnerable in society including a Specialist Modern Slavery Scheme.

Victims of Modern Slavery are often trafficked into the UK from other countries or within the UK from city to city and exploited through forced labour, sexual exploitation, domestic servitude, criminal activities, forced marriages or honour based violence.

This is a place where perhaps the most vulnerable women and often their children can find safety as they slowly start to build their lives again. Their words will not be able to express their thanks for these kind donations.