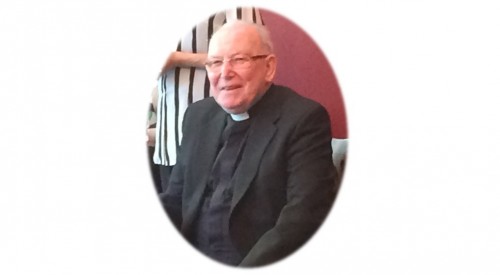 Catholic Care’s trustees, staff, former colleagues, friends and those who had cared for and supported him gathered to give thanks for the life of Canon Maguire, firstly on the evening of Wednesday 11th January at St John the Baptist followed by his Funeral Mass at the Cathedral of St Anne on Thursday 12th January.

The church of St John the Baptist was full to capacity as Canon Maguire’s body was received into church. Father Duane Reilly was the main Celebrant supported by around 20 of Canon’s brother priests. The Eulogy was delivered by by Canon James Callaghan who spoke about Canon Maguire’s work with Catholic Care over many years and the positive impact he had had on the lives of so many.

The Funeral Mass in the Cathedral was celebrated by Bishop Marcus along with around 50 priests from across the Diocese. Canon Callaghan delivered the sermon saying “it is for his long association with Catholic Care that Canon Maguire will be best remembered around the Diocese.”

Canon Maguire started his official association with Catholic Care in 1982 when he was appointed Administrator (CEO), following in the very large footsteps of Mgr. John Murphy. In reality, his actual association with the Charity had begun well before this date when he was recruited by his predecessor to preach around the Diocese for donations and volunteers.

He continued in the role of Administrator for 10 years and oversaw major changes in the services delivered by Catholic Care. The 1980s were a time of great change in the care of children and Canon Maguire had the unenviable task of closing down a number of residential children’s homes as the care of children moved out into the community. Canon was also visionary and saw the opportunity presented by the Care in the Community Act to open small group homes for adults with learning disabilities and mental health issues. It was at this time that the Charity changed its objectives to not only care for children, but adults as well. These services continue successfully today.

Perhaps a part of the work Canon Maguire enjoyed the most was the adoption service and he carried with him to the end happy memories of the families and the blessings he gave to them as they took a child into their family. He always remained supportive of these families and celebrated the Charity’s Annual Adoption Mass until the service ended in November 2014.

Canon Maguire handed over the reigns of Catholic Care in 1990 to Stuart Hanlon yet still remained involved, offering his experience and energies in the role of Trustee, a role he finally stepped down from in 2016.

His 34 years dedicated service to Catholic Care were celebrated in May last year when Bishop Marcus celebrated a Mass of Thanksgiving followed by a reception at Bishop’s House for friends and former colleagues, of which there were many. This was a very dignified way to say goodbye to an organisation which had been so important and dear to him over the past 34 years. The smile on his face that day said it all.

Following his retirement as Parish Priest of St, John the Baptist in Normanton and latterly as his health failed, Canon Maguire was cared for at his home by Catholic Care. The members of staff treated him just as he treated many, with respect, dignity, friendship and compassion, day and night.

Canon Peter Maguire really did make a positive difference to the lives of so many people.

May he rest in Peace and Rise in Glory.