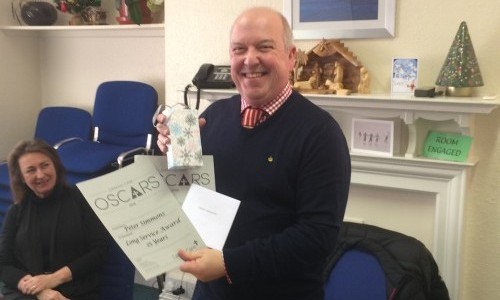 At the Oscars evening in October we celebrated by awarding those staff who had achieved 25 years.

It is when we look at long service that adjectives like dedication, loyalty, commitment and devotion really do start to have a meaning. The people that were awarded on that evening have spent ¼ of a century with Catholic Care and we really do owe them a debt of gratitude.

Unfortunately Peter Simmons was unable to attend on the Oscars evening itself and last Friday, Carol Hill (Director of Catholic Care) caught up with Peter for a coffee. Peter currently works with older people and supporting adults with a learning disability. He has served Catholic Care for 25 years.

Carol told Peter’s colleagues gathered that he joined Catholic Care in November 1990 initially only intending to stay for a short while – and here he is over 26 years later.

After spending 10 years in children’s residential services in the South, Peter came back up North, joining his sister Mary, who already worked for Catholic Care. Working in the children’s homes at Redholt and Moor Road, where he was known to the children as ‘Big Pete’ he progressed to Registered Manager at Fixby Road children’s home and later at Lanshaw Crescent.

As the needs for children’s residential care diminished Peter moved on to the Adults with Learning Disabilities Service in 1999. Taking on the role of Registered Manager at Westhaven in Dewsbury, Peter’s transition into this service proved to be a great success both for him and for the residents he cared for and supported.

2013 saw a further change for Peter as Catholic Care further developed its Supported Living Services and Peter joined the team as Assistant Domiciliary Care Manager. This service is now extending into provision for older people and Peter has been supporting older people living in their own homes and also retired priests from the Diocese.

In and amongst all this Peter is also well known for his artistic flair, which he has used in presentations, photography, videos etc. – it seems there is no end to his talents.

Peter takes on all challenges with a smile (or could that be a grimace) and his cheery manner is welcomed by all. Not bad for someone who was only here ‘for a short while’