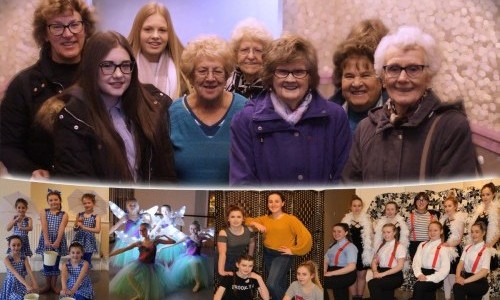 ‘Making Memories’ is a reminiscence documentary-making project being produced by Helen Brand and Michelle Vink with technical and creative help from students at Leeds Film School. The short film will illustrate the journey of friendship-building between older parishioners from both Keighley parishes and younger pupils from Holy Family School, Keighley over a 6 month period.

Helen Brand, Development Worker for the ‘Embrace’ initiative which is currently being piloted in the Keighley and Skipton Deanery, reports on a recent social outing of the group involved in the filming:

“On January 21st a group of ‘Making Memories’ participants both young and old met for a matinee performance of ‘The Jolly Postman’ at Victoria Hall in Keighley. The show was put on by The West Yorkshire Dance Academy which practises weekly at Keighley Catholic Centre – and it starred one of our younger team members from Holy Family School.

It was our first social outing together as a group and everyone enjoyed themselves thoroughly, some of the older people were surprised and delighted that Keighley held such talent as the whole performance was extremely professional. We all vowed that we must make more of getting out and about together over the next few months!”